We invite all stakeholders to submit information, articles, and request for specific topics they want to publish or address in the monthly newsletter. These topics or requests will enhance the quality and relevancy of the newsletter and inform our subscriber base of relative and key information about the industry. We will add these articles and information free of charge to the newsletter. This newsletter however will not promote or create a platform for advertising products or services.

The year so far has seen unprecedented activity in the wildlife market. The activity in auctions in the wildlife market has not seen this buoyancy since the peak periods of the industry during 2014 to 2017. We have seen an abnormal increase in enquiries and requests for game since March 2021 through to May 2021 and double digit revenue growth in our bi monthly auctions against 2020.

We have noticed some interesting trends in prices of certain species, increasing at a higher rate of inflation this year.  These price increases are mainly due to the demand of certain species exceeding the supply. There is a noticeable shortfall in supply of several species in the market which will continue to impact positively on the pricing of these species for the foreseeable future. Prices of certain game species, like zebra and giraffe, have been flat for the last ten years but have seen a substantial upwards trend this year. This trend boasts positively for the future market growth of the industry.

AWA has over the past three year projected certain changes to the industry in our Annual Game Price Industry Report. Those projections and estimates are starting to realise this year and impacting on market pricing.

The dominance of major industry players (and breeders) in the game industry, relative to auctions, have substantially reduced in the past two years. The impact of this change can clearly be seen in profile of current active buyers registering for auctions. Pre 2020 auctions were dominated by these major players, but the last two years have seen a complete realignment of the market to hunting, small and medium game farmers and breeders.

The industry was dominated by these large and consortium game breeders during the periods 2014 to 2018, hosting major auctions and controlling the market spend for up to 75% of the annual revenue of the auction industry. We have seen a major change to this trend during 2020 and even more prevalent in 2021. The major players are no longer investing in the game industry to the extent of which they participated pre-2020. Latest estimates and analysis of buyers on auctions indicates that the market percentage spend of these major players have reduced drastically. The market spend is now dominated by hunting and small to large game farm owners. These farmers are close to 80% of the current industry spend and continue to growth monthly. Very interesting, is the growth of a new market segment driven by farmers investing in rare game due to the affordability of the current rare game prices. It is currently, for example, more affordable to buy a sable cow on auction than a kudu cow. The lower prices allow this market segment to actively participate, acquire and in invest in the rare species market segment, they previously could not participate in.

Drastic reductions in the rare game prices since 2017 has created and established a new market segment for the industry. Most of these species are now affordable for this segment and the entry of these players in the market has created a huge market potential for these species. Important to note that several new players have now entered this market segment.  These players are all new entries to the market and have no history or recollection of the collapsed prices of the rare game market in 2017 to 2019. They see massive growth opportunities at these  lower prices and therefore new investments are starting to materialize again in the game industry.  Their input base for acquiring rare game is substantially lower , thereby creating the possibility of materializing reasonable long-term returns on these investments. 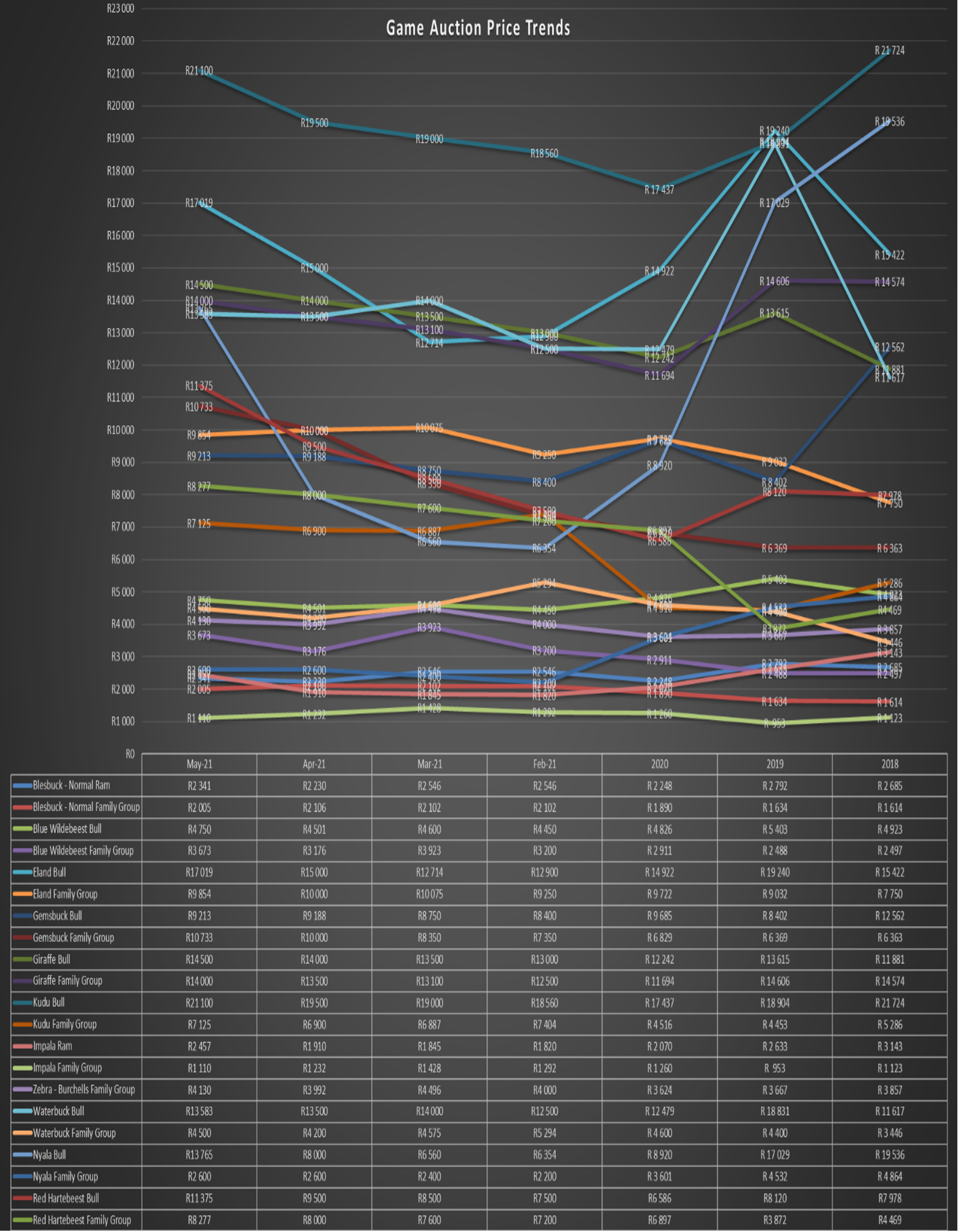 Certain species have been impacted more than others, due to the shortage of supply in the market. The “bread and Butter” lines for local and corporate hunting is currently experiencing the highest demand, therefore also seeing the biggest percentage increase in prices. We believe it is important to highlight the following specific species:

The demand for kudu family groups is enormous and we cannot fulfil the current demand at this point. The continued drought over the past ????????????????

The demand for gemsbuck family groups is high and we cannot fulfil the current demand.

The demand for zebra animals is driven by the market for culling and venison. Rand per kilogram prices for zebra meat are currently very attractive and forces the auction prices to increase to ensure supply to the hunting market.

Red hartebeest is difficult to breed in the bushveld. They also do not take kindly to drought in areas. These factors impact the quantities of red hartebeest and the shortage of supply is currently the largest of all species.

Rationale of the increase in prices of certain species

Several factors impacted on the shortage of supply of certain species in the market. We believe they can be categorised and explained as follow:

The impact of the last 7 years of below normal rainfall has had a severe impact on some of the species. The shortfall of kudu cows and red hartebeest species can directly be attributable to the last years of drought in certain areas

The production of venison meat has materially increased in the past three years. There are now several “culling” outfitters that focus on suppling of venison to butcheries and the export meat market. This new market segment has reduced availability of certain species to the auction market substantially.

Several hunting farms catering exclusively for international hunters were forced to move into the local market to ensure their survival. They are now catering for corporate and local hunters and required the necessary game species on their farms to address this market segment. Most of these farms focussed mainly on male and trophy animals in the past. They needed to stock up for the new market segment and have started to buy mostly plains game species for their farms.

We believe this trend will continue in the foreseeable future. This will also continue to have an impact on prices and continue to drive the current upwards trend of prices in the market.

Demand for meat/venison has grown exponentially the past three years. This demand for venison has impacted on the supply to game auctions during the past two years. Weak prices in certain species made it more profitable to cull animals than sell on the auctions. Species, like giraffe and zebra, meat or culling prices are more attractive to game farm owners that catching and selling on auctions.

The following table will explain the interaction and impact this have on the game prices:

The table clearly indicates that game auction prices are now driven by the venison prices received on certain animals.

Highlights of past 4 months auctions 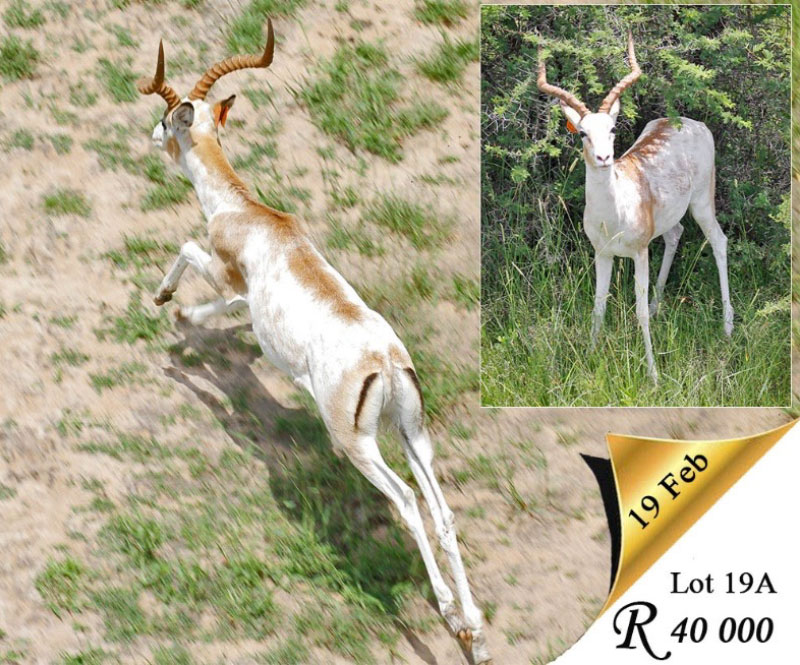 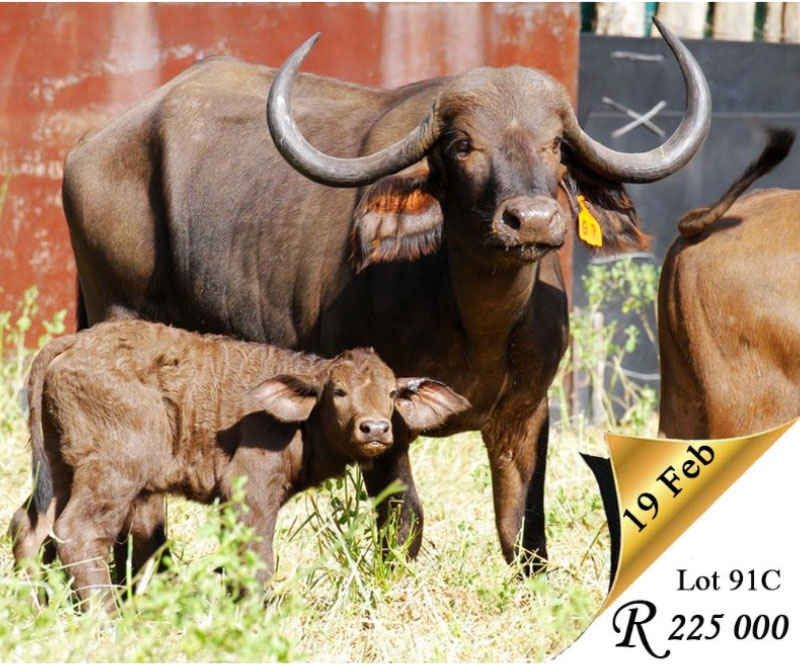 AWA leading the way in new flexible options for our clients

The event of Covid has forced the industry to move more rapidly to online and internet technology. Contrary to announcements in the media regarding online technology, AWA was the first auction house in South Africa to offer live webcasts and online bidding on the internet platform, since 2014. AWA has hosted more than 300 online and live webcast auctions over the past 7 years and arguably have one of the most stable and user-friendly online platforms in the industry. AWA is the only auction house that owns and use its own streaming technology and does not rely on partners to ensure the quality of streaming on their auctions. Wildlife Auctions (AWA’s platform) currently have over 7 500 registered users on its website. 50% Of these registered users are active users and participate using the website and app functionalities regularly. Most of the users have actively used the website and app for many years and are very comfortable with the functionality and technology available on the platforms, which improves AWA take up for every auction.

We use cookies on our website to give you the most relevant experience by remembering your preferences and repeat visits. By clicking “Accept All”, you consent to the use of ALL the cookies. However, you may visit "Cookie Settings" to provide a controlled consent.
Cookie SettingsAccept All
Manage consent

This website uses cookies to improve your experience while you navigate through the website. Out of these, the cookies that are categorized as necessary are stored on your browser as they are essential for the working of basic functionalities of the website. We also use third-party cookies that help us analyze and understand how you use this website. These cookies will be stored in your browser only with your consent. You also have the option to opt-out of these cookies. But opting out of some of these cookies may affect your browsing experience.
Necessary Always Enabled
Necessary cookies are absolutely essential for the website to function properly. These cookies ensure basic functionalities and security features of the website, anonymously.
Functional
Functional cookies help to perform certain functionalities like sharing the content of the website on social media platforms, collect feedbacks, and other third-party features.
Performance
Performance cookies are used to understand and analyze the key performance indexes of the website which helps in delivering a better user experience for the visitors.
Analytics
Analytical cookies are used to understand how visitors interact with the website. These cookies help provide information on metrics the number of visitors, bounce rate, traffic source, etc.
Advertisement
Advertisement cookies are used to provide visitors with relevant ads and marketing campaigns. These cookies track visitors across websites and collect information to provide customized ads.
Others
Other uncategorized cookies are those that are being analyzed and have not been classified into a category as yet.
SAVE & ACCEPT
Powered by